The Cambridge-Narrows Regional Library is a small, shingled wood frame building that has been refurbished inside and out and is fast becoming a community center. It was built in the mid-1850's and retains its structural integrity from that period.

The Cambridge-Narrows Regional Library is designated as a Local Historic Place for its documented uses the years that represent a lot of the social history of the village. The Baptist cause was strong in the village and its followers were natural adherents of Leonard Tilley and his temperance organization, the International Order of Good Templars. This hall was built between 1854-58 on land donated by Samuel Black, and possibly built, at least in part by him. It was certainly there in 1867 when Leonard Tilley planted the so-called “Tilley Elms” along the front of the Cambridge Hall in commemoration of Canada’s Confederation. By the 1970’s, when these trees had become a hazard, they were removed and one member of the Senior Citizens group salvaged a large round section, dressed it, polished it and preserved it as a souvenir; it still is displayed in the library - just above the doorway at the back right of the building.

Sir Samuel Leonard Tilley, one of the Fathers of Confederation

The Templars occupied the building into the early 20th century, then for as much as six decades, it served as the Agricultural Hall. The Agriculture Societies were widespread within the province and were made up of local farmers whose chief goal was to improve methods of farming. They held one-day agricultural fairs in this building and were involved in sponsoring lime kilns and importing well-bred animals for breeding purposes.

With the decline of small farms, the hall was obtained by the local Senior Citizens group who made substantial improvements to it, including indoor plumbing. As this group declined, the hall was used by a relatively short-lived community Women’s Institute group, and then by an equally short-lived Lions group. In the 21st century, the Village Council, at the request of a well-organized and energetic citizens’ group, decided to explore the idea of a library for the Village of Cambridge-Narrows and the surrounding area. This has come to fruition and it is a pleasant, useful and vibrant addition to the community.

The basic structure of the original hall is still evident. The addition of the foyer was designed purposely to complement the original structure. The two doors into the main building are reminiscent of the typical one room school construction in rural areas and the original placement of the windows has been maintained. The only original feature in the interior is the board and batten treatment of the walls.

A similar portrait would have been on display at the front of the Cambridge Hall between 1850's and 1870's.

The Cambridge Hall was built in the mid-1850's, before Confederation,

when Sir John A. MacDonald became the first Prime Minister of Canada on July 1, 1867. 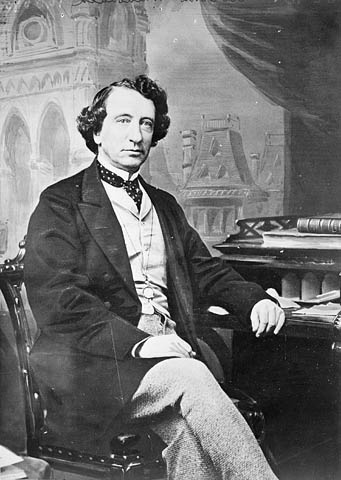 The following article was written by David R. Henderson for Life at the Lakes, August 2017

The building which houses the Cambridge-Narrows Regional Library, located at 2216 Lakeview Road, Cambridge-Narrows, is one of the older buildings in the area. It would likely have been built between 1854 and 1858. When Samuel Black transferred the land which would house the Second Cambridge Baptist Church in May of 1858, which was immediately next door to the present library, he stated that the church property was bounded on the south side “of land owned and occupied by the Trustees of the Johnston Division No. 62, Sons of Temperance”.

The land on which the library building is located is said to have been sold or donated by Samuel Black. The following is taken from the book Early Baptists of Cambridge Parish, “Samuel Black owned the farm at the corner ….. Several pieces of land had been sold off his farm. ………The Temperance hall and later the church were built on land given by Samuel Black”. The same source goes on to state “Samuel Black, a son of George Black, owned the property at the corner in Cambridge. He should be remembered as the donor of the land on which the Temperance hall and the present Baptist church are built”. Also, “The church at Cambridge was organized in 1855. This church, located a few hundred yards up from the cross-roads, was dedicated in November of 1858. It was built on land donated by Samuel Black, who had earlier given the land for the Temperance hall, just next door to the church”. It might be noted that Samuel Black had only purchased this property, from Seth Chase, a short time before this, in 1854.

Unfortunately, it doesn’t appear that the above mentioned “Trustees of the Johnston Division No. 62, Sons of Temperance” ever registered a deed to the property, as no record of it happening exists in the land transactions for Queens County.

Undoubtedly minutes of the meetings of the Sons of Temperance would have been kept, but none appear to have survived to the present day. At some point in time, a division of the International Order of Good Templars (I.O.G.T.) was organized at Cambridge, designated as “Queens Own Lodge”, and apparently held their meetings in the temperance hall. The following articles were taken from the newspaper Queens County Gazette: March 16, 1898, “Queens County District Lodge I.O.G.T. convened with Queens Own Lodge in the Temperance hall at the Narrows on Saturday, the 5th. Although the day was stormy, there was a very large representation present from the lodges of the county”; July 26, 1899, “Queens County District Lodge convened in Quarterly session with Queens Own Lodge in the Temperance hall at Cambridge on the 11th. On account of the small number of representatives being present from the different lodges, there was no session held in the forenoon. At 2;30 o’clock p.m., the session opened with George A. Wilson, D.T., in the chair”.

The February 17, 1911, issue of the Kings County Record chronicles the following for us – “A number of the young people attended a lecture on Home Nursing given by Miss Scovil in the Temperance hall, Narrow West, on Friday evening, which proved both interesting and beneficial”.

Also from the Kings County Record, October 18, 1918, came the following – “The schools at The Narrows, Cambridge, Lakeview, McDonalds Corner and Hammtown held a successful School Fair in the hall at Cambridge on Tuesday, October 1. The hall was nicely decorated with flags and autumn leaves. The fair was largely attended by parents and friends from the different districts participating.”

July 1, 1926 – “The Sewing Circle held a supper and sale up here in the hall, and there was a concert from Jemseg held in the hall in the evening. It was very nice”.

(note:  see 'Local History' page for all of the notes from the Alice Straight diaries)

At this point we interrupt the Alice Straight diaries, which will be continued below, to make notice of the fact that ownership of the hall has changed. On August 18, 1926, a deed was written which transferred ownership from the “Grand Division Sons of Temperance of N.B.” to “The Cambridge Agricultural Society”. This appears to have been the first actual deed registered for the property, and description of it was as follows ‘ “….bounded as follows; on the southeast by shore-road leading from Narrows to Lakeview, on the northeast by land owned and occupied by Frank Robinson, on west and rear by land owned by John Corcoran and on the southwest by land owned by the Baptist church.” Also included in this deed were some rights reserved by the Sons of Temperance, as follows – “….right is reserved by the party of the first part to the use of the hall mentioned in this contract, or any hall remodelled from the present building, for one night each week for the Sons of Temperance division work should a division of the Sons of Temperance ever be reorganized in the community, party of the first part agreeing to pay to party of the second part a nominal rental to cover expense of light and fuel only. It is further agreed that should any question arise as to which night in the week should be used for division work or the amount of rental to be paid in which the local parties fail to agree, that the questions in dispute shall be laid before the executive committee of the party of the first part”.

This change of ownership did not appear to interfere with the community use of the hall, as we will see from the following taken from Alice Straight’s diaries –

October 30, 1926 – “There is a masquerade party and concert held up here in the hall. After the concert, games were played and refreshments were served. Everybody had a very nice time”.

In an “Agreement” dated March 28, 1962, and registered in the Registry Office at Gagetown, transferring ownership of the hall and building from “The Cambridge Agricultural Society #157 to The Washademoak Women’s Institute” we see the following regarding the Cambridge hall – “…Cambridge Agricultural Society No. 157 transfer their claims on the agricultural hall and grounds received from the Grand Division of the Sons of Temperance to the Washademoak Women’s Institute, on condition that the agricultural society have the use of the hall up to 12 times per year (if necessary) on payment of a fee not exceeding the cost of heating and light.” Also included in this “agreement” is the reservation which was included in the 1926 deed which transferred ownership from the Sons of Temperance to the Cambridge Agricultural Society regarding usage of the hall. The boundaries of the property involved at this time is as follows – “On the southeast by shore-road leading from Cambridge to Lakeview, on the northeast by land owned and occupied by Talbert Carpenter, on the west or rear by land formerly owned by the late John Corcoran, and on the southwest by land owned by the Baptist church”.

The next, and final (to 2017), transfer of ownership of the hall and land occurred in a deed dated April 7, 2005, when the Cambridge-Narrows Women’s Institute conveyed it to the Village of Cambridge-Narrows. Again, this deed refers to and continues the reservations to the Sons of Temperance in 1926 and to the Agricultural Society in 1962.